their voice: a teen’s commentary 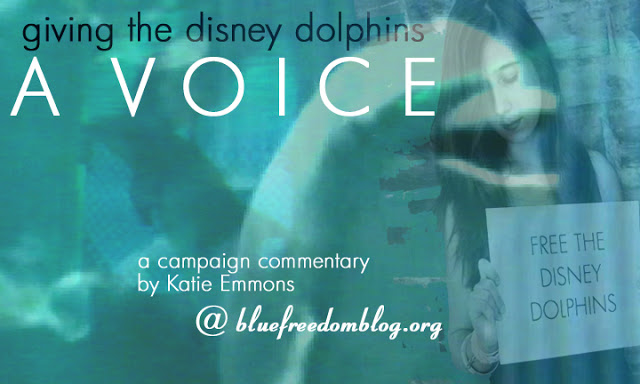 It was early April, and I was as psyched as a seventeen-year-old who just found out they’re finally going to Disney World for the first time in their entire life could be.

I mean, I grew up on Disney; in many ways Disney films are what inspired me to get involved in helping to protect the environment and save our planet; films like Bambi, Happy feet, Disney nature, and of course Finding Nemo.
Which is why I was shocked when I ran across a page on Disney’s website, a few days before the trip, about captive dolphins and a ‘dolphin encounter’ program.

My reaction? “Wait…Disney has captive dolphins?”

I soon discovered that it was frighteningly true- and on top of it all? The four captive dolphins (Rainer, Khyber (Keebler), Calvin and Malabar) are kept in a tank at “The Seas with Nemo and Friends” pavilion.
I was dumbfounded; wasn’t the whole message behind Finding Nemo that life in a tank is no life at all?
Wasn’t Nemo the poor little fish who was taken out of the ocean and trying to find his way home again?
Nemo’s message, for me, was all about keeping the wild, well, wild and about how distressing captivity is for animals.

But at the Seas With Nemo exhibit, there are animated fish, animated bubbles, a fun, music-filled ride, and….live dolphins in a tank?

After I found out about this exhibit, my family and I had a serious discussion about whether or not to go ahead with our plans to visit Epcot because of the live dolphin display.
My Mom had been to Epcot before, loved it and had always wanted to take my sister and I- and needless to say I’d always wanted to go, too.
But we don’t believe in buying the ticket to marine parks or places that display marine mammals.
So after thinking things through for awhile, we decided that we would go and enjoy Disney- but I would also bring a video camera and visit the Pavilion to learn more about the conditions of the dolphins at Epcot and see what I could do to help make the situation better- if indeed there were captive dolphins in the facility. With the lack of media attention and web updates on Disney’s part, it was hard to tell how dated this information was. 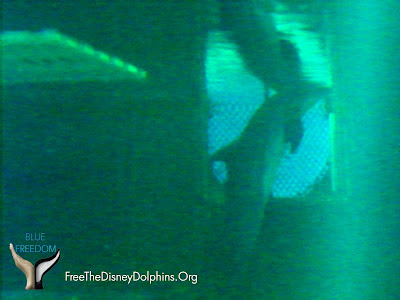 So we went to the park and totally enjoyed it- because, like I said- I love Disney -but when we came to the “Seas With Nemo” exhibit, my heart totally broke.

The dolphins were swimming in a small, murky pool with little to no natural sunlight and an artificial coral reef. In fact, the dolphins that were even a few yards away from the thick plexiglass were barely visible through the cloudy water.
I know, I know; “It’s really a HUGE tank!” -well, maybe for us it’s huge, but for these free-ranging beings that can swim 40 to 80 miles a day, vocalizing, using echolocation, jumping and breaching? …It’s really not that big anymore, is it?

In fact, it’s sort of…tiny. Really tiny if you are one of the dolphins.

I took out my flip cam and started filming, walking around the rooms where the dolphin pool was visible.
One dolphin was swimming around in slow, aimless circles while the other hung limply at the surface; it’s head pressed up against one of the few barred-off windows in the pool.

“I really don’t know how to explain what I felt when I was watching these dolphins…it was like, a mixture of grief, anger and a burning desire to do something about this- to help them.”

I watched as a trainer presented a “research skit” with one of the dolphins; she gave out a few simple facts about dolphins- something that could be done more in-depth at Disney without live dolphins being present -but she talked mostly about the captive lives of the dolphins and the other animals there, then proceeded to signal the dolphin to “wave” and blow bubbles at the guests. 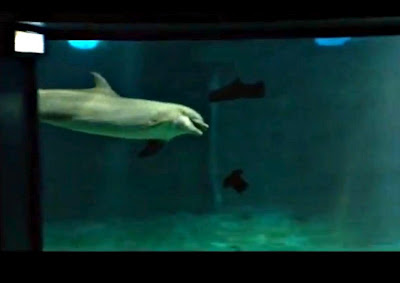 Only a few days before, a friend of mine, Nicole Cavacas, had been at the facility and watched the trainer do another “research skit” which simply consisted of playing a “matching game” with the dolphin- signalling for the dolphin- Rainer -to try over and over to make the correct match after “guessing wrong” every time. This has been done previously with captive dolphins and is not considered a groundbreaking scientific discovery. “They just kept doing the same thing over and over…and it didn’t look like the dolphin wanted to do it.” Nicole told me. “I just didn’t see the point. I don’t think anyone really did.”

While I was standing there- in the surreal darkness of the dolphinarium, listening to the whimsical music playing and the children laughing and screaming while the dolphin preformed, I could see the problem so clearly it brought tears to my eyes.

A ghost of the ocean- a mere apparition of his wild counterparts -that’s what Rainer was to me as I stood there watching him.

People have accused me of “just going after the big company- running up to the tank just to get a piece of sad-looking footage to post on the Internet and bring attention to yourself” but please believe me when I honestly tell you that was and is not my motivation.
I was just one of the many kids at Disney that day- one of the many kids who love the magic of the experience. And Epcot is magical. But the live dolphin display isn’t.
In fact, it rather took away from the magical experience and totally clashed with “Nemo’s” message.

I’m not an expert and I don’t claim to be- but I am a thinker, I do my homework, and just about anyone would tell you that you don’t have to be an expert or a scientist to see that this is wrong.

I mean, here were four real-life “Nemos” doomed to spend the rest of their lives in this small concrete tank.

Something about that just tore me up.

Before the trip, when I was still back home in Vermont where I live, work and study, I googled these dolphins and tried to dig up as much information as I could about them; but it didn’t amount to much. I found virtually little to no info about the dolphins at Epcot.
It seemed like they literally had no voice.
So while I was there, amongst them, I filmed, walked around, and asked an employee a few questions then left. 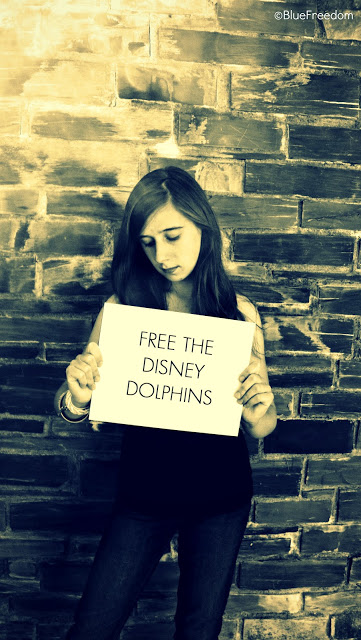 They needed a voice and I was determined to give them one.
And when I got home, that’s exactly what I started working on.

After brainstorming and collaborating with Blue Freedom team members, I created a factual campaign website, basically just going over what I saw while I was at Epcot and discussing the dolphins’ history.
Then I started a petition, hoping to get 4,000 signatures to send to Disney, asking them to please release these dolphins to seapens.

After talking to people and reading the comments on the petition, I was surprised to see how many people had no idea that Disney even has captive dolphins.

If this was really a ground-breaking research project, wouldn’t Disney want to get the word out about it?
Where is the media attention?
Why the blackout when it comes to this ‘research program’ and it’s incarcerated participants?
Somewhat to my surprise, the Disney dolphins proved themselves to be a topic of great interest to many- sending the number of signatures on the petition skyrocketing to over 20,000 signatures and landing a story on the front page of the Huffington Post Teen website.
Change.Org has been a tremendous help in getting the word out about this issue; Everyone at Blue Freedom and I are very grateful for helping us turn up the volume of these dolphins voices. We are proud to collaborate with them.

I really am thrilled to see the word getting out about this issue- about these four beautiful, intelligent creatures living in a tank. Because a few weeks ago they were pretty much muted and invisible to the world. And now, after years and years of exploitation, they finally have a voice.

That, to me, is powerful.

If we, together, can continue turning up the volume of their cries we will change the world for them. For these four, beautiful dolphins. Living in a tank in Orlando. 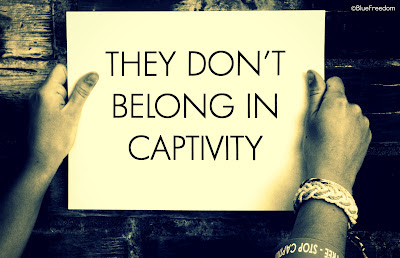 I truly believe that this is not what Walt Disney had in mind for his parks. Like myself, he loved and cared about wildlife, calling environmental protection issues “very close” to him.


“The preservation of our American wildlife is very close to me, the fish in our streams, birds, deer, and other animals in our fields, forests and wetlands. These are all important parts of our national heritage, and we must protect them if future generations are to enjoy them.” -Walt Disney as Honorary Chair for National Wildlife Week – National Wildlife Federation 1957
I don’t believe he would want these intelligent, free-ranging creatures confined to a small cement tank at Disney World.

These large, free-ranging beings don’t belong in captivity- live animal entertainment is not the way of the future. Disney has the opportunity, and some would say an obligation, to set an example for the future of the entertainment industry.

Please, help me get the word out about these dolphins.
If we don’t speak out for them now, who will? 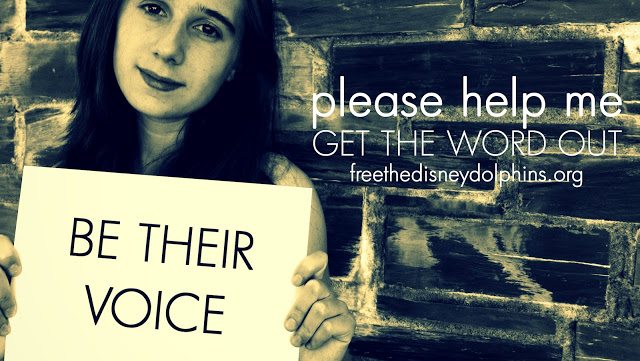 On behalf of Rainer, Khyber (Keebler), Calvin and Malabar,
Thank you.

Note to press: all photos and quotes are © Blue Freedom and may be freely used for media purposes. Thank you.